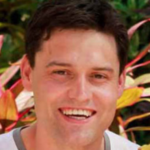 Dustin was responding by helicopter from Moosonee to a medevac request in Attawapiskat shortly after 12:00 am. Contact was lost with the helicopter shortly after takeoff. The crash site was found at daybreak a few kilometres away from the launch site. Dustin, his partner Chris Snowball and the two pilots, Don Filliter and Jacques Dupuy all perished in the crash. Dustin was 34 years old and had worked in the James Bay area for the previous two years. He was married and had one child.